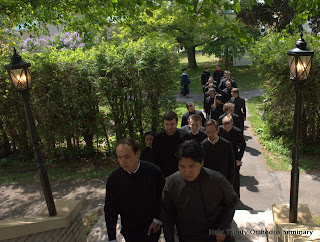 In order to graduate, I needed to leap over several hurdles and jump through several rings of fire. The first hurdle was completing my thesis. Having gone through several drafts and a continued back-and-forth with my adviser, I finally had a final draft to bind and submit. I bound two copies: one for me, and one for the library, or rather, for the dark recesses of the archives, into which nary a student enters. Alas, once I got my personal copy back, I realized that I had numbered the chapters all wrong, and so I had to reprint my thesis before the official copy could be bound with the same error.

Another hurdle comprised my final exams. As in every other semester, I needed to write about eight or so exams, but juggling this with my thesis research (which had I started perhaps a bit late) was somewhat taxing to me mentally. Plus, I kept being distracted by Reddit.

The final and most menacing obstacles of all were the comprehensives, or so it seemed to me at the time. We had to pass four comprehensive exams in order to graduate. The first exam consisted of short answers such as labeling the areas of a church, writing down who said what biblical quotation, etc. The second exam was multiple choice, and had questions covering nearly every single class we took over the past five years. The third exam was an essay, and the fourth was an oral examination in front of a panel of three people, including the rector, Fr. Luke. Thankfully, the comprehensives were pretty easy, and the panel rather lenient, so I ended up passing.

And so, I walked the path from the monastery cathedral to the seminary hall for the last time. We sang the American (“The Star-Spangled Banner”) and Russian (“God Save the Tsar”) national hymns, people got awarded books, and I got my degree in a crimson folder. Near the end, I stood up and delivered a short valedictory address.

I am no longer “Seminarian John,” but simply “Reader John,” or “Ex-seminarian John.” Being a seminarian shaped my identity and way of life for half a decade, but now I must move on and begin life anew, in what the Orthodox know as “the world.” I am also, God willing, going to be married in a few months.

Thus, this is the last post of “Jordanville Journal.” I always intended this blog to last only as long as would my time as a seminarian, and that time has now come and gone, like a flower in the field. However, this does not mean that I am finished as a blogger. For posts on sundry topics, you can find my writing on the Holy Trinity Bookstore blog. And for a continuation of my adventures in Orthodoxy, you can take a look at my new blog, aptly titled “John After Jordanville.” I enjoyed having you as readers, and hope you will join me there.